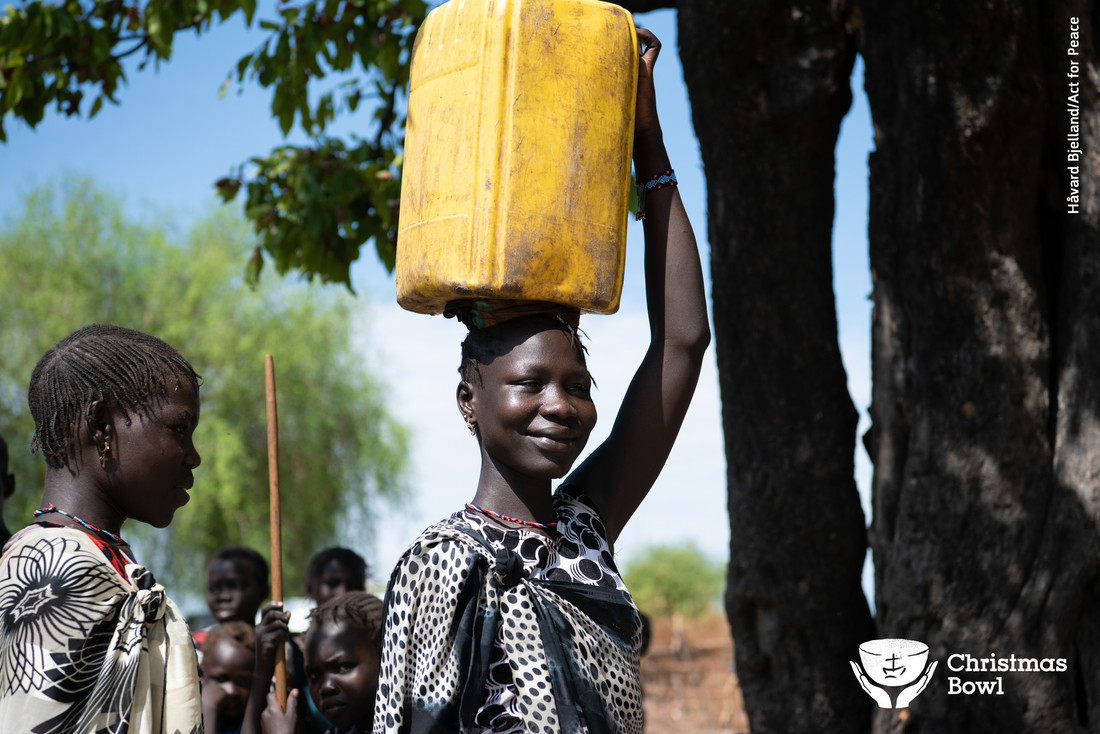 Sunday (20) and her five children live in a harsh desert region of Gumuruk, South Sudan, where there’s been little access to clean water. During the worst seasons of drought, they often had no choice but to drink polluted water. It broke her heart to see her children constantly sick. Act for Peace’s partner Norwegian Church Aid is bringing clean water, hygiene and sanitation to families like Sunday’s.
“Life is completely different after we got safe water. Many now live under very difficult conditions in this drought so we feel really lucky.”
The town of Gumuruk is located in the middle of the inhospitable desert landscape of the state of Jonglei in South Sudan. Earlier on, the 55,000 inhabitants had to cope with polluted water, and the diseases flourished. Not least the children were severely affected by diarrhea and other waterborne diseases. During droughts, the lack of water was often critical. In 2014, Norwegian Church Aid came to the city and established a treatment plant that makes the contaminated water completely safe to drink.
Today life flourishes in the big marketplace in the middle of the city. Norwegian Church Aid established a small office in April this year, after many years of drilling, finally found a good and sustainable water source at 110 meters depth.
“It was a great experience to see the water splashing out of the ground,” says Kari Øyen, Norwegian Church Aid's country director in South Sudan. “If this source proves to be as good as we hope, it means a lot to everyone in Gumuruk. Enough water for everyone, for the animals and for cultivation – it represents a major difference.”
In cooperation with the local church, Norwegian Church Aid built one of the schools, and has also contributed to the city's only clinic. Nevertheless, it is the vital water that is mentioned first and foremost when we talk to people around the city

“We live a simple and often laborious life. In the drought there are fewer wild animals to hunt for. Still, life is completely different after we got safe water. Even the animals were sometimes sick before. Many in Somalia now lives under very difficult conditions in this drought, so we feel relly lucky. I want to thank Norwegian Church Aid,” says Sunday

South Sudan, with an estimated population of 11.4 million, has suffered a tremendous political and social upheaval since gaining independence from the Republic of Sudan in 2011. The cumulative effects of years of conflict, violence and destroyed livelihoods have left more than 7 million people - or about two thirds of the population - in dire need of some form of humanitarian assistance and protection in 2019.
Five years of the most recent conflict has forced nearly 4.2 million people to flee their homes in search of safety, nearly 2 million of them within and 2.2 million outside the country. More than half the population is severely food insecure. Persistent conflict is the main driver of hunger, however poor infrastructure, disruption of livelihoods, poor economic conditions and inconsistent humanitarian access have continued to drive food insecurity.
Act for Peace’s partner, Norwegian Church Aid (NCA), are on the ground providing life-saving assistance including access to clean, safe water, shelter kits and menstrual hygiene kits for women.
NCA also equip local volunteers with the skills needed to undertake hygiene promotion work within the community. They are trained in the basic skills and messages needed to help people to understand the relationship between water-borne diseases and water and sanitation, hand washing, safe household sanitation and public health.